Synchronise every second
YOU WANT US TO
CALL YOU BACK?
Support
Quote

To most people, GNSS (Global Navigation Satellite System) satellites are something vague that fly around the earth. As long as they function correctly, who cares which ones we use for tasks like positioning and timing?

Not all systems are the same, and when it comes to business use, it's important to understand the differences.

GNSS is a generic name for a group of artificial satellites that send position and timing data from their high orbits. The group includes the well-known GPS (Global Positioning System) but also the new Galileo European system.

Most satellite navigation systems operate on similar principles. The satellites are arranged in geosynchronous orbit (each satellite’s speed and altitude is carefully controlled so that it stays in the same place in the sky). 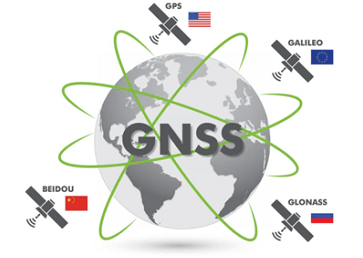 Geosynchronous satellite orbits have a few interesting properties. Since the individual satellites maintain their relative positions, they form stable artificial constellations. By equipping each satellite with a radio transmitter, it's possible to calculate position data from the ground by listening to the signals coming from recognised devices and estimating the timing delays. Alternatively, a receiver that knows its position can calculate the local time.

These satellite constellations vary in terms of their orbital heights and the speeds at which they fly around the sky. Other technical distinctions include the fact that they employ mostly unique radio frequency bands for their data transmissions.

Here are the major players:

The Global Positioning System is owned and operated by the United States. The official US Department of Defence name for GPS is NAVSTAR.

BeiDou (or BDS, formally known as COMPASS) is a regional GNSS owned and operated by the People's Republic of China.

GLONASS (Global Navigation Satellite System) is owned and operated by the Russian Federation.

Which GNSS System Should You Use?

In the end, your choice of satellite constellations should reflect your use case. For instance, if you were deploying a network in a particular country, you'd probably go with whichever positioning system provided the most accurate information. Multi-GNSS systems can solve problems like outages by using a variety of different systems. For instance, if part of the QZSS satellite constellation fails, the receiver might fall back on GLONASS, BeiDou, or Galileo. This capability means that users don't have to stick to a particular option to enjoy reliable timing and positioning feedback.