The Residence Palace in Brussels with Bodet Time 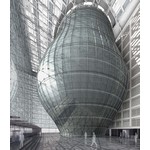 This new building will house conference rooms, offices for the institution administrators and for the European Union member states representatives, some committee secretaries’ offices, a restaurant, rooms for official dinners and rooms for the press.

On this occasion, the Residence Palace halls and corridors were equipped with more than 80 Bodet clocks.